Don’t forget to leave a review on Podchaser so they’ll send some money to Wheels on Meals America through the #Reviews4Good program.

Or, The Episode Where I Can’t Speak Welsh.

There’s an old Doonesbury strip (Aug 1977) where rock star Jimmy Thudpucker is sitting on Bob Dylan’s porch, chatting with Dylan (who appears as a disembodied voice coming from inside the house), and they’re discussing the fact that then-President Jimmy Carter has just called him, looking for a quote to use during his next presidential chat with the public. Apparently the President thinks very highly of Dylan, who doesn’t necessarily agree with this assessment:

And there’s a little bit of this with the Stevie Nicks/Fleetwood Mac song “Rhiannon”: Nicks saw the name in a book and was taken with it, so she began to write a song centered around the image that the name presented to her. In fact, she began a series of songs about the Rhiannon that she had in her head.

Later on, she discovered that Rhiannon was a Welsh goddess whose attributes dovetailed rather nicely with the character she’d envisioned in her head. So when the song became a hit, she began to attribute the song as being about “a Welsh witch” (I can barely type that–no wonder I had trouble saying it). But the fact is, she knew nothing about the Welsh mythology when she first wrote the song.

That doesn’t take away from the overall quality of the song, but it does, at least a little bit, suck away some of the mystique that Nicks attached to it during the live performance, methinks.

Don’t forget to leave a review on Podchaser so they’ll send some money to Wheels on Meals America through the #Reviews4Good program.

Last week’s show was short, time-wise, and I promised I’d make up for it. And make up, I did, because this is one of my longer non-interview shows, clocking in at 20:30. If you listen to this show during your morning commute, you may have to circle the block a few times before going in to work.

But it’s so packed with stuff that I don’t think you’ll mind. This week we’re looking at songs that were inspired by books, a topic that’s turned out to be HUGE, and we’ll be visiting again in the future if you’re digging it.

As promised here are links to the stories I talked about during the show.

This is the link to “The Sound-Sweep.” It’s a little on the long side, but I think you’ll like it.

This is Ray Bradbury’s “Rocket Man.” I think it was scanned into someone’s computer because there are some weird typos.

In November of 1975, an ore freighter broke apart and went down very suddenly in a storm on Lake Superior. Singer Gordon Lightfoot thought that the story wasn’t getting enough attention and gathered some news clippings together, then used that material to write a song about the event.

The song was recorded within just a few weeks of the tragedy, and was released the following summer. Just a few days after the first anniversary of the sinking, the song hit Number One on the Canadian charts, and peaked at #2 in the US. I have to admit, though, that when the song came out, 13-year-old me had no idea that it was about a recent event. I figured it was either fictional, or it had happened many years ago. Imagine my surprise!

Nowadays, the ship’s location is considered mostly off-limits to all recreational diving and most research dives or equipment, now. It’s also located in a spot in Lake Superior where the border between the United States and Canada has moved several times, now. Right now the ship is on the Canadian side.

What’s that, you say? Your podcatcher hasn’t picked up the show yet? Don’t worry, you can listen to or download it by clicking on the player below. In addition, I hear it’s now available on Google Play, so you can use that if you like. I’m still working on Spotify, but they’re taking their time about it.

EDITED TO ADD: Holy cow, I can’t believe I forgot to post the video of the ship’s launching. There’s no audio, more’s the pity. If you’ve never seen a sideways ship launch before, you’re in for a treat because it’s pretty cool in general. The action starts at about three minutes in.

See you next week!

For the record: non-episode-based posts are going to have dopey titles. I’ve been doing it over at Baltimore Diary forever, and I’m going to do it here, because it amuses me and the sooner you accept it, the better off everyone will be. Mmkay?

This week’s episode was inspired by an old high school friend by the name of Kevin, who actually asked me to do a podcast about the song Crackerbox Palace, which also appears on George Harrison’s album Thirty-Three and 1/3. I did the due diligence as far as researching it, and while there is a little bit of a story behind it, it wasn’t really enough for an entire podcast, so I figured I’d save it for here. 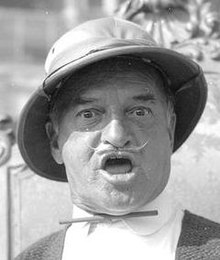 In 1975, George was at the Midem Music Festival, which is a trade show that’s been held in Cannes, France, every year since 1967. At the festival, he met up with a man named George Greif. Harrison remarked that Greif reminded him of the late comedian Lord Buckley (seen here at left). Coincidentally, Greif had been Buckley’s manager back in the day, and he invited George to come visit him at Buckley’s home in Los Angeles, which he referred to as “Crackerbox Palace”.

George was intrigued by the phrase and wrote it down, later turning it into a song that contained a little shout-out to both Greif and Lord Buckley:

Some times are good, some times are bad
That’s all a part of life
And standing in between them all
I met a Mr. Grief, and he said:

Also of note is that, in addition to the “This Song” promotional film, George made one out of “Crackerbox Palace” as well, which also aired during the November 20, 1976 episode of Saturday Night Live. If you catch the re-run that’s been cut to an hour, though, this one usually gets cut based on the time considerations. It’s also pretty whimsical, though not as obviously comedic as “This Song”.

Directed by Eric Idle, it features future Rutle Neil Innes as the nanny (above, right) and agai his future wife Olivia appears briefly in the bedroom shot (on the left). And while it wasn’t shot at Buckley’s house, it was shot at Friar Park, George’s home from 1970 until his death in 2001. Some have said that he occasionally referred to Friar Park as “Crackerbox Palace,” but I haven’t been able to nail that one down for sure.

Here’s the video. And if you’re curious, the answer is Yes: George did lift that “It’s twoo, it’s twoo” from Blazing Saddles.

In the mid 1970s, George Harrison was having a rough time of it. He was still embroiled in the lawsuit over “My Sweet Lord”, he was tangled up in other legal issues caused by his breakup with his business manager, his album Extra Texture had taken a beating by the critics, and to top it all off, while recording Thirty Three and 1/3 he was struck with hepatitis and couldn’t work for most of the summer of 1976.

But he managed to turn it around with the release of this, the first single off the album. It didn’t exactly tear up the charts (it peaked at #25 on the Hot 100), but it did remind us all that George was still around and could still bring it when he wanted to.

This episode was inspired by a suggestion by a friend of mine, who originally asked me to write about a different song that appears on the same album. It turns out that the story behind that song is quite short, not long enough for a full podcast, so I’m saving it for a post you’ll see in a couple of days.

As usual, if you haven’t subscribed via iTunes or your favorite podcast catcher, you can download it or you can listen right here:

And of course, if you’re so inclined, please leave a review on your favorite podcast software. Thanks so much for your support!

As promised, here’s the video. So tell me: who can you identify? And is that vampiric-looking prosecutor really Michael Richards?

And just for the giggles, here’s Billy Preston’s version, which was recorded first. You can still hear the “He’s So Fine” echoes in it, but I think that, compared to Harrison, Preston might have gotten away with it: